Rio Tinto Stadium usually refereed to as just Rio Tinto or The Rio-T is a purpose built soccer stadium located in Sandy City, Utah. Home to Major League Soccer side Real Salt Lake since the start of the 2008 season, the 20,213 capacity stadium is popular with fans and even hosted the 2009 MLS All-Star Game.

Rio Tinto has been the home of Real Salt Lake since opening on 9th October 2008 with a friendly match against New York Red Bulls. Constructed over a two year period, planning permission was granted as far back as 2005 for a site within the suburb of Sandy, however the project was deemed “dead” by owner Dave Checketts after the club failed to raise enough money to begin construction.

With a lack of permanent home there was a real possibility that the franchise could have been relocated after interest was expressed by several cities including New York, Rochester, St Louis. With the Salt Lake City facing the prospect of losing its MLS team, location construction company Anderson Geneva offered Real 30 acres of land at a discount price of $10 million and the project was saved.

Although one might assume that the local company would have offered the land in exchange for naming rights to the ground, this wasn’t actually the case and instead the owners of a local mining company, Rio Tinto, signed a 15 year naming rights agreement worth an estimated $1.5 – $2 million a year.

Designed by experienced Soccer architects, Rossetti, Rio Tinto successfully blends the smaller feel of a European ground with the stylings of American sports stadiums. Having previously worked on LA Galaxy’s Stubhub Center and Chicago Fire’s Toyota Park, the designers were well-practiced in creating an intimate yet open arena when it came to designing Rio Tinto.

To date the highest level of club football played at Rio Tinto Stadium is arguably either the 2009 Major League Soccer All-Star Game against Everton, or the second leg of the 2011 Champions League Final against CF Monterrey. At International Level, the ground has several qualification matches including most recently for the 2014 World Cup.

Below is a seating plan of Real Salt Lake's Rio Tinto Stadium: 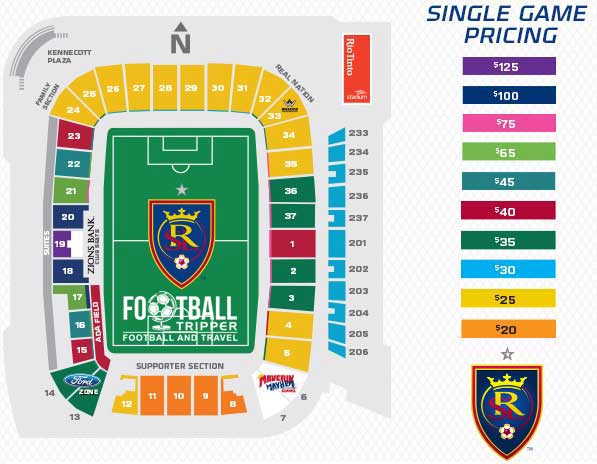 Located out of town, The Rio Tinto doesn’t really have the same pub-crawling culture as some other stadiums around the world, and thus unless you drive to South Towne Centre Shopping Mall there really aren’t many independent watering holes to choose from.

Inside the gates of the ground there are a minimum of four dedicated beer kiosks as well as a stall for Designated Drivers which exclusively sells alcoholic free soft-drinks. Budweiser appears to be the beer of choice at Real Salt Lake.

At Rio Tinto Arena there s the award winning Levy Restaurant in addition to a whole glut of concession stands ranging from Gluten free options to Chile Verde, and Four Corners Smokehouse to MillCreek Pizza.

Salt Lake City operate The Rio Tinto East Side Store located at the stadium in addition to their pages on the official MLS Store. The shops opening hours are as follows:

Real Salt Lake currently offer fans the chance to embark on a two and half hour long tour of the RioTinto Stadium, and to experience the facilities from behind the scenes including restricted access areas such as the locker rooms.

Currently the online tour booking functionality isn’t working so you’re advised to either speak to someone at the box-office in person or by phoning (801) 727-2700 which is the number for the main office.

Single ticket prices for the 2015 MLS season start at around $25.00 for the cheapest seats in the house, however by the time you include sales tax and booking fees you’re likely to be looking more at $35.00.

As tickets sell out quite quickly, it’s difficult to give a comprehensive price range for every seat inside the stadium and thus you’re advised to look there yourself.

How to get to Rio Tinto Stadium

Where is Rio Tinto Stadium?

Parking around the immediate vicinity of Rio Tinto Stadium can be a bit of a minefield, with Real strongly advising fans to check out this car park map before departing. It highlights the public parking areas, and whereas what car parks require a permit.

Fans on a budget will be pleased to know that the closest hotel to Rio Tinto, the Econo Lodge Inn is highly affordable. Southbound on Veteran’s Memorial Highway there are more options including Hyatt House, Residence Inn and Hilton Garden.

Who plays at Rio Tinto Stadium?

What is the capacity of Rio Tinto Stadium?

As of 2023 Rio Tinto Stadium has an official seating capacity of 20,213 for Football matches.

When was Rio Tinto Stadium opened?

What is the postcode for Rio Tinto Stadium?

Covid Restrictions may be in place when you visit Rio Tinto Stadium in 2023. Please visit the official website of Real Salt Lake for full information on changes due to the Coronavirus.