Dick’s Sporting Goods Park, commonly shorted to just DSG Park is a purpose built soccer stadium located in Commerce City, Colorado. With a capacity of 18,086 which can be expanded to 26,000 for larger events, Major League Soccer Side the Colorado Rapids are well equipped with decent facilities to be competitive within the league.

Dick’s Sporting Goods Park is the home of Colorado Rapids Soccer Team who first formed in 1996, with the club previously playing their home fixtures firstly at Mile High Stadium (1996 – 2000) and Invesco Field at Mile High (2001 – 2006). It was constructed over a two year period between 2005 – 2007 at a cost of over $130 million dollars as part of the Commerce City civic centre.

During the stadium’s inaugural season, the ground was chosen to host the 2007 Major League Soccer All-Star Game against Celtic F.C, with the American’s defeating the Scottish side, setting the precedent of success for Colorado follow. In 2010, The Rapids won their first ever MLS Cup after defeating the San Jose Earthquakes in the final following a victory against Columbus Crew in the previous play-off game.

Dick’s Sporting Goods Park is owned by Commerce City and operated by Kroenke Sports Enterprises (KSE) who are also part-owners of Premier League side, Arsenal F.C. As one of the few purpose built Soccer Stadiums in the U.S, Rapid’s stadium has occasionally hosted matches of the National team including a qualification match against Costa Rica for the 2014 World Cup in Brazil.

Below is a seating plan of Colorado Rapids's Dick’s Sporting Goods Park: 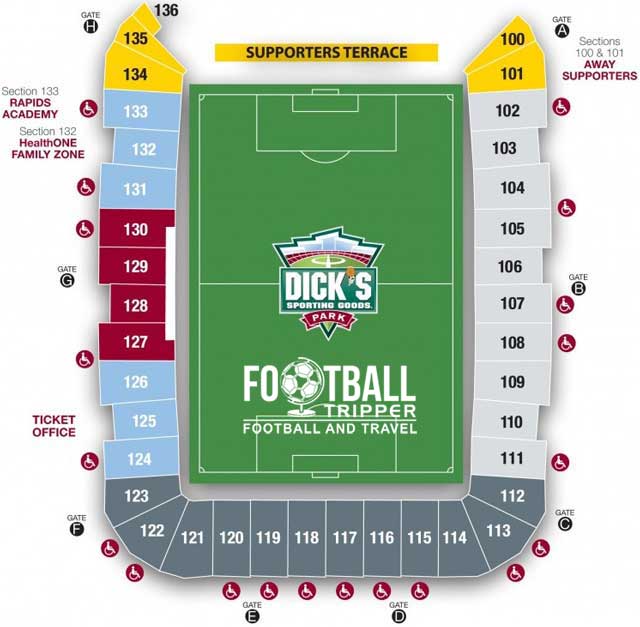 Supporters of the visiting team are officially housed within Section 100 of the stadium, and travelling fans should request tickets in this section if they wish to make some noise during the match.

The nearest bar to Dick’s is the Halftime Sports Bar on the corner of Quebec Street and 60th avenue, otherwise you are looking at either drinking inside the stadium or driving south to The Shops at Northfield Stapleton where there are half a dozen bars and places to eat.

At the stadium between Gates D and E in the south concourse there is the Eighteen76 restaurant and bar which is popular on matchdays. The menu generally consists of American sports staples such as burgers and wings, and it opens for up to two hours before kick-off.

The official club shop is known as “Altitude Authentics” and there are two branches within Dick’s Sporting Goods Park. The largest and main store is located within the Western stand next to the Gate G where the box office is, and the smaller stand is housed within the south-east corner near to Gate C.

The stadium’s operators KSE offer guided tours of the facilities between Monday and Fridays, 9.00 am – 6.00 pm all year round weather permitting. The tours are free for fans, however you are required to obtain a ticket from the box office and are issued on a first-come, first-served basis with groups of 10 or more required to book in advanced.

For more information regarding the tour feel free to phone Dick’s Sporting Goods Tour hotline on 303-727-3599.

How to buy Colorado Rapids Tickets

Single ticket prices for Colorado Rapids during the 2015 season are listed below however please note that they are subject to tax and booking fees:

To obtain Colorado Rapids tickets you can either book online via the official online seller Altitude Tickets , by phoning the ticket line on 1.866.461.6556 or by visiting the box-office in person between Monday and Friday 9.00 am – 5.00 pm.

How to get to Dick’s Sporting Goods Park

Where is Dick’s Sporting Goods Park?

Dick’s Sporting Goods Park is located on the south-western corner of the Ricky Mountain Arsenal National Wildlife Refuge. This is within Commerce City between the intersections of 60th avenue & Quebec street.

At the stadium there are five or so large car parks which contain just under 5,000 spaces for you to drop your car off. Once you enter the immediate environs of the ground follow signs to the general access car parks, and follow instruction from the parking attendants.

Colorado Rapids have a number of “partner” hotels which provide fans with certain discounts and perks. The Embassy Suites Hotel Denver-Stapleton is around 4 miles from the ground and is highly recommended as it offers fans a complimentary ride to and from Dick’s Sporting Goods Park on matchdays. The Marriott located Downtown is also popular with Soccer fans.

What is the capacity of Dick’s Sporting Goods Park?

As of 2023 Dick’s Sporting Goods Park has an official seating capacity of 17,424 for Football matches.

What is the postcode for Dick’s Sporting Goods Park?

The postcode for Dick’s Sporting Goods Park is 80022.

Covid Restrictions may be in place when you visit Dick’s Sporting Goods Park in 2023. Please visit the official website of Colorado Rapids for full information on changes due to the Coronavirus.