BC Place is a multi-functionally sports stadium located in the city of Vancouver, Canada. The capacity of the ground changes depending on what sport is being played with Soccer matches having a reduce capacity of around 21,000 down from the maximum size of 54,320 spectators.

BC Place is a multi-purpose sports venue dating back to 1983 when it was constructed over a two year period in anticipation of the 1986 World’s Fair known as Expo 86. It underwent major renovation in preparation for the 2010 Winter Olympics set to be hosted by Vancouver, with the British Columbia (BC) government announcing that over $150 million dollars was being invested on the 16th May 2008.

The substantial renovations were carried out across two phases with the first part of the plan focusing on upgrades to matchday facilities such as the seats, bathrooms, concession areas and corporate hospitality boxes. The second phase involved the removal of the “air-supported roof” and replacement with a cable supported, retractable roof  similar to that of the Commerzbank-Arena in Frankfurt.

With both roofs being the largest of their kind in the world and the addition of the biggest central-hung scoreboard in North America ahead of the Dallas Cowboys Stadium, it proved to be a monumental task. Nevertheless the renovations were finished in time for the Olympics, and many Sports fans consider BC Place to be one of the most beautiful stadiums in the World and Canada’s very own Crown Jewel.

British Columbia Place has been home to the Vancouver Whitecaps since the final month of the 2011 MLS season with the club signing a five year lease taking them through to the 2016 season. The club’s inaugural match was held against the Portland Timbers, with the 54,320 capacity stadium which is shared with BC Lions Football Team, reduced to 21,000 for Soccer matches.

View of BC Place

Below is a seating plan of Vancouver Whitecaps FC's BC Place: 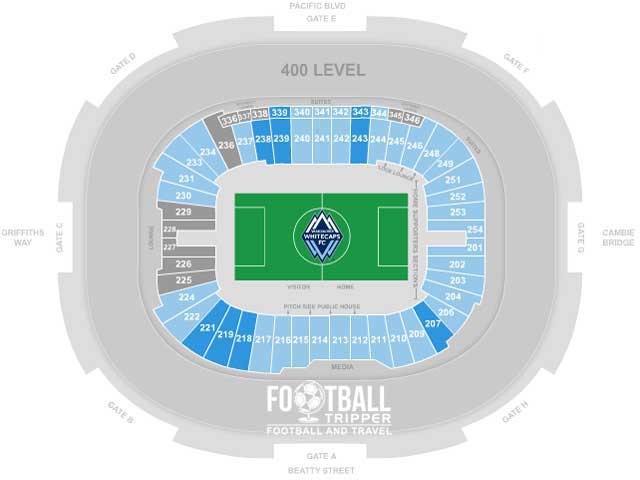 BC Place Stadium is comprised of four stands: North, East, South and West.

Located within an urban area there a large number of watering-holes between the Skyline Station and stadium, with discounts available in a lot of places for fans who hold season tickets.

Two of the most popular sports bars frequented by fans on matchdays are the Pint Public House & Sports Bar just north of the Skytrain stop, and the Red Car Sports Bar to the west.

Inside the stadium Budweiser is available on tap as it is the official beer of Vancouver Whitecaps. Please note that you can’t take your own beers into the stadium, and that alcohol stops being sold around the 70 minute mark of most games.

West of the ground on Beatty street there are two popular Italian joints known as Frankie’s Italian Kitchen & Bar, and as you enter the ground Boston Pizza. A few blocks away just past the public library there is the likes of Jimmys Taphouse and Kingston Grille.

Inside the concourses of BC Place there are a number of food stalls run by Centerplate caterers which include the likes of hotdogs, burgers and fries using locally sourced ingredients.

It doesn’t appears as if the operates of BC Place currently offer fans the chance to undertake guided tours of the stadium. For now you will have to make do with this excellent 360 degree virtual tour.

Ticket Prices to see Vancouver Whitecaps play Football during the 2015 MLS season typically range between $30.00 – $150.00 Canadian dollars and can be purchased via the official ticketmaster page.

Follow the link to view an interactive map of the ground from which you can select your position within the stadium. The cheapest tickets are generally in the corner and behind the goals.

How to get to BC Place

Where is BC Place?

BC Place is located in the heart of downtown Vancouver next to Rogers Arena which is home of the Vancouver Canucks ice hockey team.

The Address for satnav is as follows:

In addition to two car parks belonging to BC Place there are also up to seven parking areas open to the general public. To see a map of your parking options please click this link.

Hotels Near BC Place

Within the down town area there are a good number of hotels to choose from with the closest of all being the Georgian Court Hotel followed by the Rosedale on Robson Suite. There is also the affordable YMCA Vancouver and slightly further away is the Moda Hotel.

Who plays at BC Place?

American side Vancouver Whitecaps FC play their home matches at BC Place.

What is the capacity of BC Place?

As of 2023 BC Place has an official seating capacity of 22,120 for Football matches.

When was BC Place opened?

What is the postcode for BC Place?

The postcode for BC Place is V6B 4Y8.

Covid Restrictions may be in place when you visit BC Place in 2023. Please visit the official website of Vancouver Whitecaps FC for full information on changes due to the Coronavirus.