Stade Saputo in French or Saputo Stadium in English is a 2008 purpose built soccer stadium located in Montreal, Quebec. Home of Canadian Major League Soccer side Montreal Impact, the 20,801 capacity ground was built on the former athletics track of the 1976 Summer Olympics, and was recently renovated in 2012 making it the second largest Soccer stadium in Canada.

Saputo Stadium first opened on the 21st of May 2008 becoming the second purpose-built Soccer stadium in Canada after Toronto FC’s BMO Field. The inaugural match was held against the Vancouver Whitecaps with Impact first competing with Major League Soccer four years later in the 2012 season where they managed to place 7th in the conference.

Initially conceived as a stadium fit for just Canadian Soccer matches, Stade Saputo underwent $40 million dollars worth of renovation in order to prepare it for when the club joined MLS. The original capacity of 13,034 was expanded to 20,521 with the pitch receiving under-soil heating and an irrigation system similar to what is used at English Premier League grounds resulting in a high quality playing surface.

Favoured by the Canadian Men’s National Soccer Team due to the natural grass compared to the artificial surface at other grounds, the Quebec government invested over $23 million in the renovation of the Stade Saputo. Unfortunately the building work took longer than expected with the club forced to locate to the nearby Olympic Stadium for the first six home games of the season.

The first MLS game to be held at Saputo Stadium therefore took place on the 16th June 2012 with fans feeling it was worth the wait, as Montreal Impact defeated the visitors, Seattle Sounders, 4-1, ushering in a new era of football in style. Impact became the 19th Franchise and third Canadian City joining Toronto and Vancouver.

Below is a seating plan of CF Montréal's Stade Saputo: 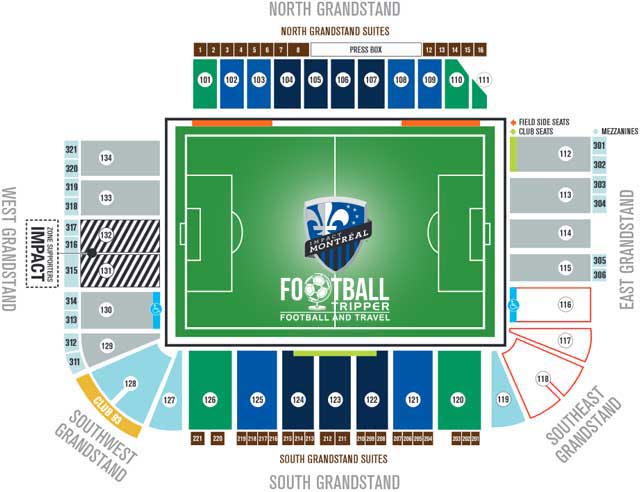 The closest pub which is independently run is the Madisons NY Bar & Grill located five minutes north of the ground just off of Rue Viau. Otherwise you’re better advised to drink inside the gate or downtown before making the journey to the football.

Montreal Impact have partnered with several pubs downtown to ensure games are shown live throughout the city. Three examples are the Pub Burgundy Lion, Hurley’s Irish Pub and Ciociaro Sports Bar & Grill. These are guaranteed to show both home and away matches complete with glorious sound.

Besides the range of expected match-day food options inside the ground there are a handful of restaurants circling the perimeter of Olympic Park. To the east there is Restaurant Pizzeria Hochelaga, south there is Restaurant La Belle Province and northwards on Rue Sherbrooke there is Toit Rouge American style diner.

Montreal Impact operate an official club shop at Saputo in addition to their own online store which is known as the fancy sounding Boutique Impact Montreal. The stadium store has the following opening hours:

It doesn’t look as if Impact currently offer fans the chance to undertake a stadium tour of Stade Saputo. If this changes we’ll be sure to update this section, for now though you can always check out this cool virtual venue tour.

How to buy CF Montréal Tickets

Tickets to see Montreal Impact play Soccer at Stade Saputo can either be purchased online from the official Ticketmaster page which is the club’s recommended ticket vendor or from the box office at the ground.

Please note that prices listed do not include booking fees and are subject to change.

How to get to Stade Saputo

Where is Stade Saputo?

Located within Montreal’s Olympic Park Stade Saputo naturally inherits great transport infrastructure which ensuring getting to and from the stadium is really easy.

Within Olympic Park there are 6 underground parking lots which have space for an estimated 4,000 vehicles. Capable of accommodating even larger crowds at the nearby Olympic stadium, there’s usually enough spaces for everyone who goes to watch the soccer.

Métro de Montréal is the main form of public transport in the city, and the busiest subway system in Canada meaning that the reliability of service is very high.

The two nearest stations to Saputo Stadium are Viau and Pie IX which are both accessible via the green line. To get to the stadium from downtown catch the green line northbound towards Honore-Beaugrand, and on the return catch it southwards labelled as Angrignon.

The closest hotel to Stade Saputo is the Hotel Universel Montreal which overlooks Olympic Park followed by Le Chablis which is two blocks north of the stadium. The remaining options such as Hilton Garden Inn Centre-Ville are all located down town.

Who plays at Stade Saputo?

What is the capacity of Stade Saputo?

As of 2023 Stade Saputo has an official seating capacity of 20,521 for Football matches.

When was Stade Saputo opened?

What is the postcode for Stade Saputo?

The postcode for Stade Saputo is H1V 1A1.

Covid Restrictions may be in place when you visit Stade Saputo in 2023. Please visit the official website of CF Montréal for full information on changes due to the Coronavirus.