Elbasan Arena or Ruzhdi Bizhuta as it was previously known is the home ground of local side KF Elbasani and also the Albanian National Team for the qualification matches of Euro 2016.

Elbasan Arena first opened in 1967 under the name of Ruzhdi Bizhuta Stadion who was one of KF Elbasani’s most famous players. Constructed in the 1960s, the ground was built to replace the club’s former ground which had slowly become a set of outdated facilities.

For the majority of Ruzhdi Bizhuta’s history, the stadium has been used exclusively by KF Elbasani but in January 2014 it was announced that the ground would host Albania’s qualification matches of Euro 2016. This decision was taken by the Albanian Football Federation in order to allow the usual national stadium Qemal Stafa to undergo extensive renovation work.

Before Elbasan Arena could host the matches however it would have to undergo refurbishment itself,  and in total over €5.5 million invested into the stadium. Work to bring up the stadium to UEFA’s required standards began in February 2014, and finished 7 months later in October.

Numerous improvements were made to the stadium including the installation of new floodlights, 12,500 new plastic seats, new changing rooms, executive seating areas, new scoreboards, and to top it all of a brand new playing surface was laid.

The stadium then reopened on 8th October when Albania hosted Denmark in their second qualification match of the campaign. Played out in front of a sell-out crowd of 12,800 – the record attendance to date, Albania earned a 1-1 draw against their more favoured opposition.

Below is a seating plan of KF Elbasani's Elbasan Arena: 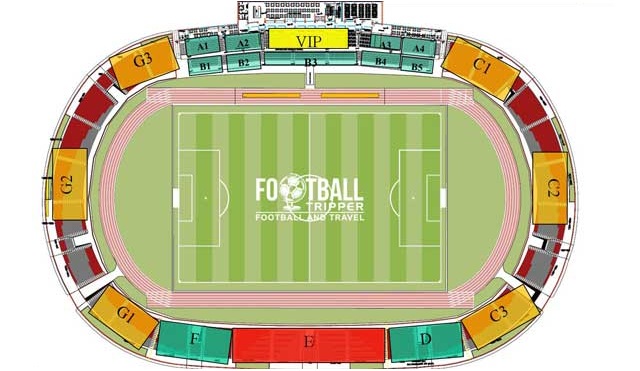 Elbasan Arena is comprised of a single-tier of continuous seating which forms an oval bowl shape:

Away fans appear to be housed within one or two blocks of the south-east corner of the stadium. The above seating plan suggests that this is known as G1, with the seating block appearing as if it will barely hold 500 supporters.

Although there’s not too many pubs, bars and restaurants listed on Google, rest assured that you will encounter numerous places just by walking around Elbasan centre.

It doesn’t appear as if there’s a permanent football store located at the ground, so only expect to find merchandise for sale during matchdays.

There really aren’t enough facilities at the Elbasan Arena to justify offering a stadium tour. You can see most of the stadium when you attend a match.

How to buy KF Elbasani Tickets

Tickets to see any International match should always be obtained in advance of the match via the relevant football associations. Away fans are then required to collect them the day before or a few hours before kick-off at a local hotel in most cases to negate the impact of ticket touts.

How to get to Elbasan Arena

Where is Elbasan Arena?

Elbasan Arena sits a fraction over 1.0 km north-east of where Google defines as Elbasan city centre. This means fan can easily walk to the stadium in just under 15 minutes.

The stadium’s address for satnav is:

Located in a largely residential area and bordered by the public Rinia Park, there’s a real lack of onsite parking available at the ground.

Thankfully the city centre of Elbasan is compact enough for you to park elsewhere and walk.

The main airport of Albania is named after Mother Teresa, and is located 62 km north of Elbasan. At just over 1 hours drive away, you may wish to hire a rental car or if you can, find a taxi driver who will take you the distance.

The compact city centre of Elbasan isn’t blessed with the greatest number of places to stay. The three most popular ones appear to be Hotel Grand, Hotel Imperial and Skampa Hotel – all of which are 10-15 minutes west of the stadium.

Who plays at Elbasan Arena?

What is the capacity of Elbasan Arena?

As of 2023 Elbasan Arena has an official seating capacity of 12,800 for Football matches.

When was Elbasan Arena opened?

Covid Restrictions may be in place when you visit Elbasan Arena in 2023. Please visit the official website of KF Elbasani for full information on changes due to the Coronavirus.