A. Le Coq Arena or Lilleküla Stadium as it was originally known is the home ground of both Flora Tallinn and the national football team of Estonia.

Lilleküla Stadium first opened on 2nd June 2001 with a 2002 World Cup qualification match against the Netherlands. Attended by a sold out crowd of 9,323, Estonia at one point when two nil, but ultimately succumbed to a 4-2 defeat by their more illustrious visitors.

Home to Estonia’s National Football Team ever since, the new facilities replaced Estonia’s former home, Kadrioru Stadium which dates back to 1926. Capable of accommodating up to 5,000, even for a small nation such as Estonia the ground was deemed too small – not to mention the antiquated facilities on offer.

The ground forms part of the wider sports complex which also contains the Sportland Arena or for sponsorship reasons A. Le Coq. Miniarena. Capable of holding 500 fans, this pitch is generally used for the reserve matches and youth games of both FC Flora.

For sponsorship reasons the stadium is currently known as A. Le Coq Arena which is the name of the most popular beer in Estonia. Founded in London back in 1807 and brewed in Tartu, from 1826 onwards, the company today retains its headquarters in Estonia.

As for the future of the A. Le Coq Arena there’s little to suggest that the ground will be expanded further. Although it can be expanded to 10,300 via temporary seating, this option is very rarely taken up these days, although it was used for the Euro 2016 qualification match against England back in October 2014.

View of A. Le Coq Arena

Below is a seating plan of Estonia National Team & Flora Tallinn's A. Le Coq Arena: 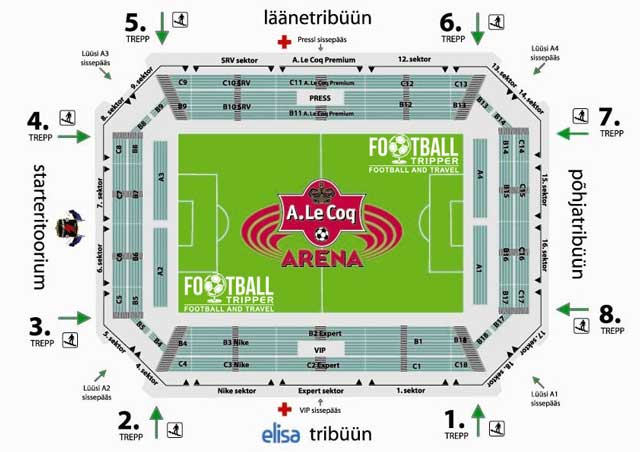 A. Le Coq Arena Away Section

Away fans are housed within the uncovered north stand which spans two-tiers including sections A1-A4, and B14-B17. When England visited for a qualification match, additional temporary seating was installed at the front to create a third tier and in total an estimated 1,200 tickets were allocated to England supporters.

You can enter the away section via the north-west corner which is signposted as “LÜÜS 4” for the lower tier and “TREPP 7” for the upper.

The old Town is a UNESCO World Heritage Site and you will find numerous picturesque pubs and bars within this area to enjoy a drink from.

There is a shop at the stadium called “Sportland Football” which sells top-flight club shirts and a range of other merchandise. Please check before visiting however the shop is reportedly open during the week from 11.00 am to 6.00 pm (Thanks to Angelo Palmeri).

Perhaps unsurprisingly there’s aren’t any stadium tours available of Estonia;s A. Le Coq Arena. We doubt this will change in the future either unless major expansion occurs!

Tickets to see your country take on Estonia in an international fixture should almost always be purchased through your national football association.

Some fans may choose to take advantage of third-party resellers, or even touts outside the stadium but these options are by no means official.

As for any domestic matches including those of FC Flora Tallinn in most cases you should be ok visiting the ticket office on matchdays before kick-off.

How to get to A. Le Coq Arena

Where is A. Le Coq Arena?

A. Le Coq Arena sits anywhere between 2.6 – 3.0 km south from Tallinn’s city centre with the distance by foot easily walk able within 35-40 minutes for most fans coming from the beautiful Old Town.

There are three small car parks at the stadium itself however they couldn’t possibly hold more than a few hundred spaces combined.

Hotels Near A. Le Coq Arena

There are no hotels within the Lilleküla district where the ground is which means you will have to head back to the city centre – which is by no means a bad thing.

You will find a lot of familiar names such as the Park Inn Radisson Blu with a general rule of thumb being that anything outside the Old Town on the whole is slightly cheaper!

Who plays at A. Le Coq Arena?

What is the capacity of A. Le Coq Arena?

When was A. Le Coq Arena opened?

A. Le Coq Arena officially opened in 2001 and is home to Estonia National Team & Flora Tallinn

What is the postcode for A. Le Coq Arena?

Covid Restrictions may be in place when you visit A. Le Coq Arena in 2022. Please visit the official website of Estonia National Team & Flora Tallinn for full information on changes due to the Coronavirus.