Helsinki Olympic Stadium or Helsinki Olympiastadion is the name of Finland’s National Stadium. Located within the capital city it has the largest capacity of any football ground in Finland, and is capable of seating just under 40,000 spectators.

Finland’s national stadium was originally constructed to host the Olympic Games of 1940, however the Summer tournament was cancelled due to the onset of World War II. Relocated from Tokyo to Helsinki, it wouldn’t be until 1952 almost twelve years later that the Finland’s Capital city would get the chance to host the Summer Olympics.

Designed by Finnish architects Yrjö Lindegren and Toivo Jäntti in the functionalist style of its time, the stadium followed the examples set by Germany’s Olympiastadion in Berlin and Italy’s Stadio Olimpico in Rome. Conflating national pride with sporting success, multi-purpose Olympic Stadiums grew in popularity in the early part of the 20th century.

Helsinky’s Olympiastadion has twice undergone major renovation work, and is set once again to be renovated after Euro 2016. Updated between 1990-1994 and a decade later in anticipation of the 2005 Athletic World Championship, the latest refurbishment will be funded by the local council and is expected to cost over 209 million euros.

Expected to take over three years to complete the stadium will close over a three year period and reopen in 2019.

The famous tower is inspired by Finnish Javelin thrower Matti Järvinen. It is built to the exact same height as throw which earned him the Gold Medal in the 1932 Summer Olympics. At an impressive height of 72.71 metres it offers unparalleled views of Helsinki.

Below is a seating plan of Finland National Team's Helsinki Olympic Stadium: 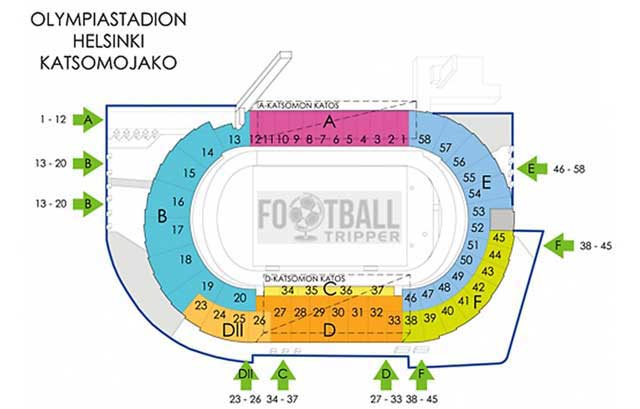 Away fans who are travelling from abroad are usually housed within the south-west corner within blocks 14 and 15 which is accessible via gate B1.

There are a handful of pubs located en-route to the Olympiastadion as well as plenty of places to drink within Helsinki city centre.

There is a souvenir shop within the lobby of the Olympic Tower.

Stadium tours aren’t available for the Olympiastadion however you can ascend the famous Olympic tower and visit the Sports Museum of Finland instead. Tickets for the tower and museum can either be booked online or purchased on the day.

Tickets for international matches should be acquired through your country’s football association.

How to get to Helsinki Olympic Stadium

Where is Helsinki Olympic Stadium?

Helsinki Olympic Stadium is located in a prime location approximately 2 km from the city centre.

There are two small car parks south of the Olympic Stadium however it doesn’t appear as if it the are available to the general public on match-days.

Central Railway Station or Päärautatieasema in Finnish is located in a prominent urban located 2.1 km south of the national stadium.

Helsinki-Vantaa International Airport sits 18km north of Finland’s Capital City, and as the country’s largest airport it naturally has numerous flights around the world and Europe.

Upon landing you can catch a new train straight to Helsinki which opened in July 2014 or if you prefer, numerous shuttle bus services.

At the stadium there is Stadion Hostel which is in an unbeatable location, with the city centre naturally boasting a better range of hotels and accomodation options.

Who plays at Helsinki Olympic Stadium?

What is the capacity of Helsinki Olympic Stadium?

As of 2022 Helsinki Olympic Stadium has an official seating capacity of 39,784 for Football matches.

When was Helsinki Olympic Stadium opened?

What is the postcode for Helsinki Olympic Stadium?

The postcode for Helsinki Olympic Stadium is 00250.

Covid Restrictions may be in place when you visit Helsinki Olympic Stadium in 2022. Please visit the official website of Finland National Team for full information on changes due to the Coronavirus.