McDiarmid Park is a football stadium located in the central Scottish city of Perth. Home to St Johnstone F.C since it opened in 1989, the 10,696 capacity ground initially cost £4.9 million pounds and is also used for Rugby Union Matches.

Below is a seating plan of St. Johnstone's McDiarmid Park: 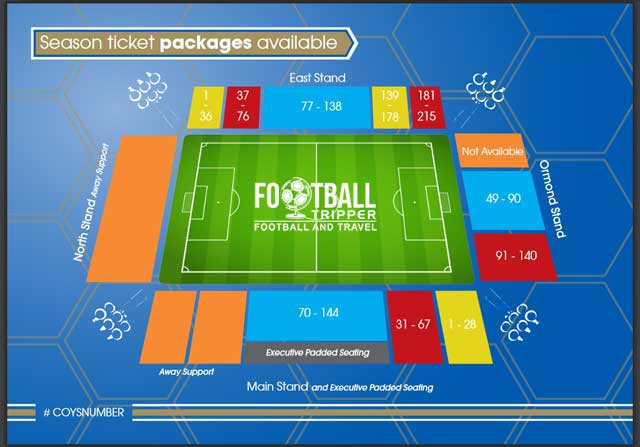 Depending on levels of demand away fans are either housed within the North or West Stand, with the former capable of seating up to 2,000 supporters on any given occasion.

The two closest pubs to McDiarmid Park are The Glover Arms located next to the Travelodge Hotel, and The 208 Public house located east of the ground on Crieff Road. Depending on whether or not you have a car, The Maltings at the Holiday Inn Express on Dunkeld Road is also a potential place to grab a pint from.

Within the city centre there are at least a dozen potential watering holes with The Foundry, The Sandeman and Royal Bar all representing the classic British boozer. If you fancy something slightly more scenic both The Capital Asset and Greyfriars Bar overlook the River Tay with a decent selection of ale to boot.

The city centre has a good mix of independently run places such as The Munchy Box, Maza Indian Buffet and Holdgates Fish Bar, which contrast well with generic chains such as KFC and Pizza Hut. For a slightly more healthy option there’s also a large Tesco located next to McDiarmid Park, although meal-deals are only as healthy as you make them!

Inside the ground there are numerous food kiosks located within each stand which offer the expected range of match day grub such as pies, hot-dogs, burgers, sausage rolls, and cold and hot drinks. The club even won a BBC award in 2011 for having the best value pies, so make sure you check them out!

The club shop is housed within the Ormond stand facing out towards the car-park, and is only open on matchdays for 90 minutes before kick-off and for around 30 minutes or so after the full-time whistle has blown. As it is hardly a mega-store, it can get quite cramped on matchdays although service is good and fans can purchase official merchandise such as kits from the club’s official online store.

It doesn’t appear as if St Johnstone currently offer fans the chance to undertake a guided tour of the facilities at McDiarmid park, however if this changes we’ll be sure to update this section.

With the exception of when McDiarmid Park hosts Celtic, the majority of home matches don’t require you to book tickets in advance, however it is still advisable if you wish to get the best possible seat. The ticket office is open Monday to Friday between 9.00 am to 5.00 pm as well as on matchdays.

Please note under 12s can only enter the stadium for free when they are accompanied with a paying adult.

McDiarmid Park is located in north-western Perth close to the interchange between Crieff Road (A85) and the A9, approximately 2 miles or so away from Perth city centre.

At the ground there is a plentiful car park with room for over 1,000 vehicles which means that it is very rare that you won’t be able to find a space. Parking is also reasonably priced at £5.00 per vehicle, and there are helpful stewards to help guide you to your space.

Perth Station is located approximately 2.4 miles south-east of McDiarmid Park, with the resulting journey by foot likely to take the average fan just under 50 minutes. As a lot of the journey is uphill the club personally recommend getting a taxi which costs a tenner and will take you around 10 minutes max.

The Travelodge just past the A9 main road is undoubtedly the closest hotel to McDiarmid Park, with the Holiday Inn Express slightly further away to the east also an option. Within the city centre there is also the likes of a Premier Inn and Best Western Queens Hotel which is right next to Perth Railway Station.