St. Mirren Park also popularly known by fans as Greenhill Road is a purpose built football stadium locate in the historic Scottish city of Paisley. Home of St. Mirren F.C since 2009, the 8,000 capacity stadium was constructed after the club sold the off the site of the previous stadium to supermarket chain Tesco.

Green Hill Road is the sixth stadium in St Mirren’s history and it replaced the clubs former home on Love Street known officially as St Mirren Park. Capable of seating over 50,000 fans in its prime, Love Street first opened back in 1894, undergoing modernisation over the 20th century.The sale of the ground to Tesco’s for £15 million in 2007 was seen as a pragmatic step to securing the long term future of The Buddies, as the deal would allow them to construct  a new ground whilst clearing existing club debts.

The new stadium had 2,000 less seats than the old ground but offered better facilities and views of the pitch with St. Mirren no longer shackled by restrictions of the site of the 19th century building. After planning permission was received by the local council construction began on the 7th January 2008 and finished a year later on the 31st of January 2009.

Costing an estimated £8 million pounds, St Mirren entertained Kilmarnock in a 1-1 draw with the ground’s record attendance of 7,542 achieved that day after the opening ceremony.  As one of the most modern grounds in Scotland, the national football association has made “Greenhill Road” one of the home stadium of the men’s under 21 football team with the youngsters currently in qualification for the 2016 European Championships.

Built by Barr Construction, the design of the stadium consists of four distinct grandstands with the main facilities housed within the east stand. One notable feature of the ground is the use of plaques which adorn the walls outside of the stadium. Featuring names of both players and members of the supporters association, the move has proved popular with fans and serves as a powerful reminder as to what football is all about.

Below is a seating plan of St. Mirren's St. Mirren Park: 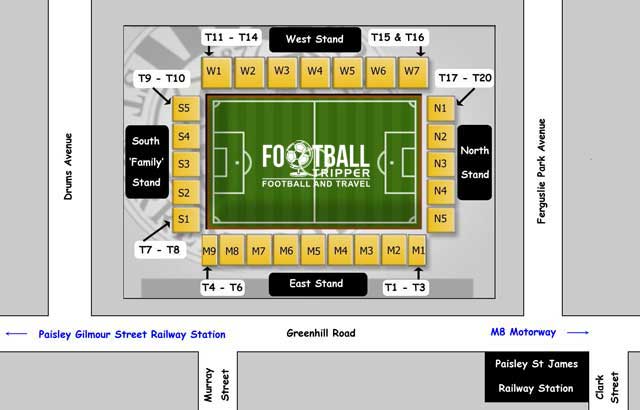 All of the pubs within Paisley tend to be located south of the stadium within the area surrounding University of West Scotland’s campus which  is perhaps no small coincidence.

Close to Paisley Gilmour Street a good starting point to get your bearings is The Last Post Wetherspoons pub which is located just off of County Square to the rear. East of White Cart Water Canal there is Gabriels which is a “lively pub-restaurant”, and for anyone who likes student pubs there is the Hamishes’ Hoose right next to campus on the high-street.

Within a five minute radius of the station there is the likes of predictable fast-food chains such as Greggs and Subway, however by venturing slightly further afield you can do so much better.  There are plenty of independently run and highly recommended restaurants including Raja Tandoori, La Dolce Vita, and The Hippy Chippy.

St Mirren are actually one of the few Scottish clubs who offer fans the chance to undertake a stadium tour of St Mirren Park however they are only run sporadically once or twice a season. Costing £5.00 per adult, the tour lasts around 60 minutes and covers the entire ground including the board room, the dressing rooms, the players’ tunnel and the corporate facilities.

How to buy St. Mirren Tickets

A lot of tickets were previously printed without seat numbers however as of the 2015 season this is no longer the case as it resulted in too larger queues on matchdays. Prices for the current season are listed below:

For further information and to purchase tickets you can either phone the club on (0141) 840-6130 , send an email to [email protected] or visit the SMFC Tickets website.

How to get to St. Mirren Park

Where is St. Mirren Park?

St. Mirren Football Club are based in Paisley, Renfrewshire, which lies within the west central Lowlands area. Their stadium St Mirren Park is located just under a mile from the centre of town.

Whilst there the club’s official car parks are only reserved for management, players and guests of the club, Sit Mirren recommend a number of locations which have on-street parking within the immediate vicinity of the ground.

The following spots are recommend by the club:

Err on the side of caution and  make sure you double check relevant signage before parking!

The closest station to St Mirren Park is Paisley St James, and although this is a convenient way to get to the ground on matchdays, it isn’t actually the main station of the town.

The main railway station which has direct links to Glasgow and other parts of Scotland is Paisley Gilmour Street which is located within the city centre.

Located 1.5 miles south of Glasgow Airport there are some big names fairly close to the stadium including the likes of Holiday Inn, Travelodge, and Premier Inn however they’re not to everyone’s taste. The centre of Paisley has more independently run places such as the Ashtree, and The Watermill Hotel.

Who plays at St. Mirren Park?

What is the capacity of St. Mirren Park?

As of 2023 St. Mirren Park has an official seating capacity of 8,023 for Football matches.

When was St. Mirren Park opened?

St. Mirren Park officially opened in 2009 and is home to St. Mirren

Covid Restrictions may be in place when you visit St. Mirren Park in 2023. Please visit the official website of St. Mirren for full information on changes due to the Coronavirus.