Estadi Nacional as the name implies is the new national stadium of Andorra, and it is primarily used to host rugby and football matches of the small European principality.

Estadi Nacional d’Andorra was constructed over a period of a year on the site of the former Camp d’Esports del M.I. Consell General sports ground.

Capable of seating 3,306 supporters, Estadi Nacional is one of the smallest national stadiums in the world which is used for football – although with a population of around 85,000 it is perhaps understandable.

The inaugural competitive fixture took place on 9th September 2014 when Andorra took on Wales in a Euro 2016 qualification match. The hosts were narrowly defeated 2-1 after Real Madrid star Gareth Bale scored a brace to cancel out Andorra’s 8th minute penalty.

Attended by a crowd of 3,150 the opening fixture thus far holds the attendance record although the match against Belgium on 10th October is expected to run very close.

The playing surface is comprised of 3G artificial grass which is approved by European Football’s governing Body, UEFA.

Below is a seating plan of Andorra National Team's Estadi Nacional (Andorra): 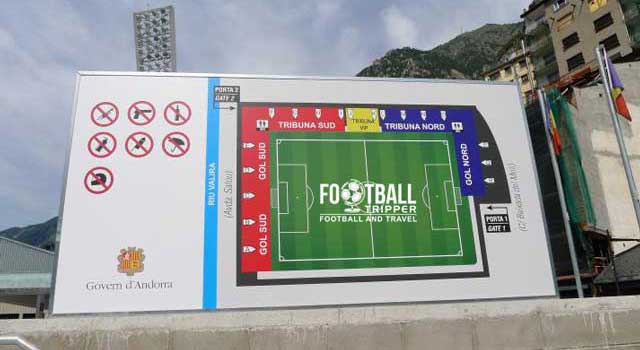 Based on Wales’ match against Andorra back in 2014, the standard away allocation for international matches appears to be around 1,200 tickets. The travelling supporters therefore usually occupy the southern goal-end which runs for the width of the pitch.

There are at least half a dozen or so places listed on Google so rest assured that you can enjoy the stunning location with a few beers in hand.

There doesn’t appear to be a permanent store at the ground, merchandise and programmes are usually sold from various stalls around the stadium on matchday.

You can forget a stadium tour at such a small stadium!

Tickets should always be acquired through your country’s football federation, there are no on the day sales for international matches!

How to get to Estadi Nacional (Andorra)

Where is Estadi Nacional (Andorra)?

Andorra’s national stadium is located centrally within Andorra La Vella which means it is easily walk able from most places within 20 minutes or so.

The stadium’s adress for satnav is as follows:

The nearest International airport is in Barcelona and upon landing you can take advantage of the frequent coach services to Andorra which take around 3 hours and departs on average 5 times a day.

There are numerous accommodation options within the compact urban area of Andorra La Vella including familiar names such as Holiday Inn, Novotel and Hotel Ibis. The locally runs ones are generally much more affordable however.

Remember that basing yourself out of Barcelona is also an option providing you have a rental car and are prepared to make the journey before and after the match!

Who plays at Estadi Nacional (Andorra)?

What is the capacity of Estadi Nacional (Andorra)?

As of 2022 Estadi Nacional (Andorra) has an official seating capacity of 3,306 for Football matches.

When was Estadi Nacional (Andorra) opened?

What is the postcode for Estadi Nacional (Andorra)?

The postcode for Estadi Nacional (Andorra) is AD500.

Covid Restrictions may be in place when you visit Estadi Nacional (Andorra) in 2022. Please visit the official website of Andorra National Team for full information on changes due to the Coronavirus.