Estadio Nacional Julio Martínez Prádanos is the national stadium of Chile, and largest in the country with a seating capacity of 48,665. Located in the Ñuñoa district of Santiago it forms part of a 62 hectare sports complex which includes a BMX circuit, athletics track and gymnasium with the design modelled after Berlin’s Olympiastadion.

Estadio Nacional Julio Martínez Prádanos’ inaugural match was held on 3rd December 1938 between famous Chilean club Colo-Colo and Brazilian’s São Cristóvão, with the home side winning the entertaining friendly 6-3. Constructed on a piece of farmland which was donated to the Municipality of Ñuñoa by a generous farmer, many believed that the stadium would become a white-elephant after opening.

In the early part of the 20th Century football was still growing in popularity as a sport and many considered the initial 48,000 capacity to have been too large – a fact not helped by allegations of corruption between the local council and construction company. However by the time Chile hosted the World Cup in 1962, Estadio Nacional had become much-loved and was even expanded for the tournament.

With a new capacity of 74,000 Estadio Nacional hosted seven matches of the tournament including three group games and a match from every knock-out stage including the final between Brazil and Czechoslovakia. The National Stadium also hosted the third place play-off which saw Chile defeat Yugoslavia 1-0, marking the nation’s greatest football achievement to date.

The stadium was officially renamed in honour of a recently deceased sports journalist in July 2008, becoming known as Estadio Nacional Julio Martínez Prádanos. This was followed a year later by an estimated $42.3 million worth of renovations to the stadium, with the lions share of the budget dedicated to modernising the ageing facilities with the capacity reduced to a more comfortable 48,665 – close to the original figure.

Below is a seating plan of University of Chile's Estadio Nacional Julio Martínez Prádanos: 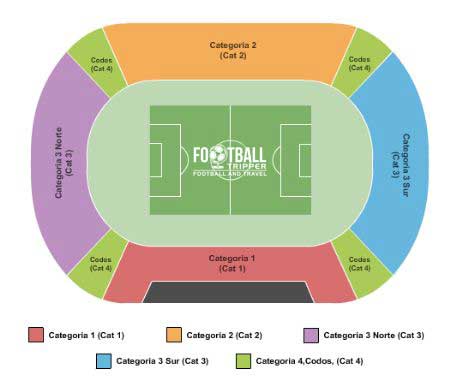