Stadion Kantrida formerly known as Stadio Comunale del Littorio has been the home stadium of Croatian top-flight football team HNK Rijeka since 1946. With a current capacity of 12,600, the 1913 built stadium occasionally hosts matches of the Croatian national team, and when they play here they rarely lose.

Built within a disused stone quarry overlooking the sea, the first game of football at the stadium was held in 1913 between two now defunct teams, HŠK Victoria and Gra?anski Zagreb. Victoria continued to use the ground until the dissolution of Austria-Hungary in 1918, and it wasn’t until after the Second World War ended in 1945 that the ownership of the stadium began to stabilise. Newly established club NK Kvarner  become permanent residents in 1946, and continue to occupy the stadium today, albeit they are now known as HNK Rijeka.

Having changed their name to NK Rijeka in 1954, the club began to compete within the Yugoslav First League as previously, the city of Rijeka was declared part of the Italian Regency of Carnaro. Annexed by the kingdom of Italy at the end of World War 1,  it was during this period that the initial 8,000 capacity stands were erected with local team U.S Fiumana competing within the Italian League system, with the Kantrida known as the Stadio Comunale del Littorio.

During the later half of the 20th century, the capacity peaked at 25,000 after two notable renovations in 1951 and 1958, with today’s capacity of 12,600 settled in 1999 after UEFA introduced new stadium safety legislation. The Kantrida is famous for having hosted football matches in every season of Croatia’s PRVA HNL since its formation in 1992, with the most notable result coming in the 1984-1985 UEFA Cup when the team somehow defeated eventual winners Real Madrid.

NK Rijeka are scheduled to play their last home match at Stadion Kantrida in December 2014, with the ground is set to be demolished before the new year. The club will then temporarily locate to Stadion Rujevica in February the following year, as the club wait for Stadion Kantrida to be completely rebuilt. The new Kantrida is set to cost an estimated €22 million and will be designed by Gino Zavanella who helped design Juventus’ new Stadium.

Below is a seating plan of Rijeka's Kantrida Stadium: 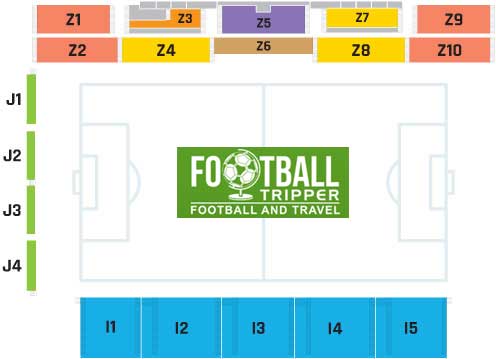 How to get to Kantrida Stadium

Where is Kantrida Stadium?

Who plays at Kantrida Stadium?

Croatian side Rijeka play their home matches at Kantrida Stadium.

What is the capacity of Kantrida Stadium?

As of 2023 Kantrida Stadium has an official seating capacity of 12,600 for Football matches.

When was Kantrida Stadium opened?

Kantrida Stadium officially opened in 1913 and is home to Rijeka

What is the postcode for Kantrida Stadium?

The postcode for Kantrida Stadium is 51000.

Covid Restrictions may be in place when you visit Kantrida Stadium in 2023. Please visit the official website of Rijeka for full information on changes due to the Coronavirus.