Stadion Maksimir located in the capital city of Zagreb is the largest stadium in Croatia, with a capacity of 37,168 and besides being home of the famous GNK Dinamo Zagreb, it is also home of the National Football team. The stadium has underwent numerous renovations since opening in 1912, with the 1997 expansion arguably being the most significant.

Maksimir Stadium first opened on the 5th May 1912, and is a football ground which has undergone numerous renovations over the years, with the most famous perhaps coming after an arson attack in June 1941.

A few months prior, the fascist government had addressed young students from Zagreb encouraging anti-Semitism , and ordering them to segregate from their Jewish friends. The children disobeyed and a few months later rebels torched the stadium down in a brave act of defiance.

1990 proved to be a turning point for Stadion Maksimir with an infamous riot taking place between supporters of Dinamo Zagren and Red Star Belgrade underlining the struggles for independence against Yugoslavia.

With Yugoslavia hosting their last national match at the Maksimir in June, 17th October saw Croatia play the United States in what turned out to be the country’s first international match of the modern era.

With Croatia firmly established as an independent nation, Stadion Maksimir was renovated in 1998 when the northern stand was rebuilt, increasing the ground’s capacity to 38,079.

The stadium underwent a facelift in the Summer of 2011 with the city and football club jointly exploring the option of a brand new 55,000 capacity stadium in the Kajzerica neighbourhood dubbed “The Blue Volcano”.

Sadly, the project was abandoned in October 2012 after failing to get off the ground as a public referendum was never held.

There are plans to replace the current stadium with a design known as “The Blue Volcanco” however so far it has been nothing but a pipe dream.

Below is a seating plan of Dinamo Zagreb's Stadion Maksimir: 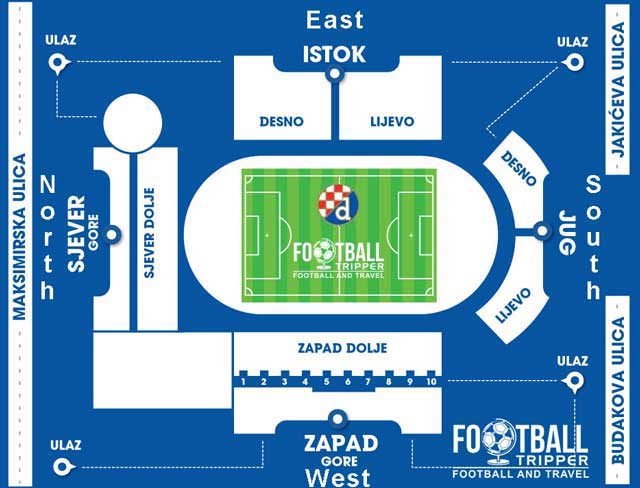 Away fans are usually housed within the south stand which is the curved one (see the pictures above).

There isn’t really a set allocation of away tickets for domestic matches as games rarely sell out, however for European games you’re looking at a minimum of 1,900 based on UEFA’s 5% policy.

The south stand is often split into two sides, with the away fans usually occupying the “desno” section which means the one on the right.

Zagreb is a lively city with numerous bars and pubs located within the area surrounding the main square. Most football fans choose to drink centrally before hopping on the tram in time for kick-off.

If you’re attending a match then you will encounter various kiosks and stalls selling a mixture of official and unofficial GNK Dinamo merchandise.

As there isn’t a permanent shop any more which means you should visit the GNK DZ web shop if you wish to purchase mementos and souvenirs.

It doesn’t appear as if the ground’s owners, the City of Zagreb, currently offer tours of Stadion Maksimir. If this ever changes we’ll be sure to update this section.

How to buy Dinamo Zagreb Tickets

Tickets to see Dinamo Zagreb at home can either be purchased in the days leading up to the match from the stadium’s ticket office or online from the official website. The box office is usually open Monday to Friday 9.00 am – 5.00 pm and for a few hours before kick-off as games rarely sell out.

Please note that ticket’s to see your country take on Croatia should be purchased in advance from your national football association/federation.

How to get to Stadion Maksimir

Where is Stadion Maksimir?

Dinamo Zagreb’s home ground is located at the foot of Maksimir Park approximately 3.5 km east of the city centre along Maksimirska cesta.

The small car park to the west of the stadium is reserved on matchdays to guests of the club which means driving isn’t really encouraged when there’s a match on.

The main railway station – “Zagreb Glavni kolodvor” sits 1 km south of the historic square in the city centre. As the main hub of Croatian Railways and the largest station in Croatia it is well connected to both the rest of the country and Europe.

Zagreb International Airport is approximately 16 km south-east of Zagreb city centre. Known as Pleso Airport after the suburb it sits within, it is the largest airport in Croatia which all but guarantees numerous flights around Europe and the World.

Upon landing you can catch a bus service into the city in around 25 minutes at a cost of 30 kuna for a single ticket.

There are numerous affordable accommodation options within a 10 minute walk of the main railway station. You will encounter recognisable names such as DoubleTree by Hilton, to smaller independents such as Hotel Dubrovnik and Hotel Westin.

Who plays at Stadion Maksimir?

What is the capacity of Stadion Maksimir?

As of 2023 Stadion Maksimir has an official seating capacity of 38,079 for Football matches.

When was Stadion Maksimir opened?

What is the postcode for Stadion Maksimir?

The postcode for Stadion Maksimir is 10000.

Covid Restrictions may be in place when you visit Stadion Maksimir in 2023. Please visit the official website of Dinamo Zagreb for full information on changes due to the Coronavirus.