Bloomfield Stadium is a purpose-built football ground located within the Tel-Aviv district of Jaffa. Capable of seating just under 14,500 supporters, the stadium is currently home to three Israeli based football teams.

Bloomfield stadium first opened in 1962 replacing Basa Stadium which had previously been the home of Hapoel Tel Aviv since 1950. Constructed over a two year period on exactly the same piece of land, the ground was financed through a mixture of private and charitable sources including the Canadian Association of Labour Israel.

Sometimes confused by football fans with Blackpool FC’s Bloomfield Road in England,  the stadium in Tel Aviv is named in honour of brothers, Bernard and Louis Bloomfield who spent their lives promoting the virtues of sports across Israel throughout the 20th century.

The inaugural fixture was played on 13th October 1962 between resident side Hapoel Tel Aviv and Shimshon Tel Aviv, however the stadium officially opened exactly two months later in December. Once again a football match was played to mark the occasion, with Hapoel taking on Dutch team SC Enschede who would later become FC Twente.

Originally regarded as the home ground of Hapoel Tel Aviv, Bloomfield Stadium has more or less had at least two tenants at any one time since opening. Since 2004, this number became three when Bnei Yehuda moved into Bloomfield joining Maccabi Tel Aviv who returned to the stadium for a second time in 2000.

Since September 2010 Bloomfield stadium has been assigned Category 4 status by UEFA which means it is capable of hosting matches of both the Champions and Europa League.

Below is a seating plan of Maccabi Tel Aviv's Bloomfield Stadium: 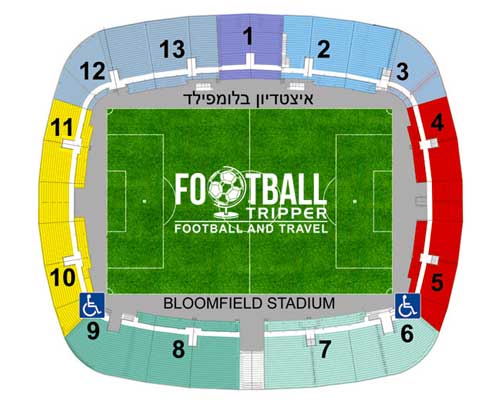 Away fans are usually housed within one of the goal-ends depending on who the home side are. For home matches of Hapoel Tel Aviv and Bnei Yehuda away fans occupy sections 10 and 11, whereas for home matches of Maccabi Tel Aviv travelling supporters are allocated seats within sections 4 and 5.

There are numerous cafes and bars within the suburb of Jafa, most of which are within 10-15 minutes walk of Maccabi’s stadium.

Whilst Maccabi Tel Aviv don’t have a shop at Bloomfield Stadium, the club recently opened a 100 square meter store at 147 Dizengoff Street in the city to complement their own online store.

It doesn’t appear as if stadium tours of Bloomfield are currently available. If this changes in the future we’ll be sure to update this section.

Tickets to see any of Israel’s team play at Bloomfield road can usually be purchased on matchdays from the ticket office at the stadium from 3 hours before kick-off.

How to get to Bloomfield Stadium

Where is Bloomfield Stadium?

Bloomfield stadium sits within the suburb of Jaffa approximately 5 km south of Tel Aviv-Yafo, which is the second largest city in Israel.

Access to the roads surrounding Bloomfield are restricted on matchdays which means you should park before you get to the stadium.

The nearest station to Bloomfield Stadium is Tel Aviv HaHagana located 2.7 km to the east. The journey is likely to take the average football fan around 35 minutes by foot.

Ben Gurion International Airport is the main airport of not only Tel-Aviv but the entire country of Israel. Often abbreviated to TLV on flight plans, it’s actually located 15 km away in the small town of Lod.

The closest accommodation option to Bloomfield Stadium is undoubtedly Ruth Daniel Residence Hotel which is one block away to the south. There are of course plenty of other hotels overlooking the Mediterranean sea to choose from.

Who plays at Bloomfield Stadium?

What is the capacity of Bloomfield Stadium?

As of 2023 Bloomfield Stadium has an official seating capacity of 14,413 for Football matches.

When was Bloomfield Stadium opened?

What is the postcode for Bloomfield Stadium?

The postcode for Bloomfield Stadium is 61084.

Covid Restrictions may be in place when you visit Bloomfield Stadium in 2023. Please visit the official website of Maccabi Tel Aviv for full information on changes due to the Coronavirus.