GSP Stadium or The Pancyprian Gymnastic Association Stadium is the home ground of three Cypriot based teams: APOEL, Omonia and the mens national team. With a capacity of 22,859 it is the largest sports ground in Cyprus, and the only one which satisfies UEFA’s 3* stadium criteria.

GSP stadium was inaugurated on 6th October 1999 with a friendly between resident sides APOEL and Omonia. Set to share the stadium, perhaps it was only fitting that the game resulted in a draw, and with three goals a piece it was certainly an entertaining one at that.

As the only stadium in Cyprus which satisfies UEFA’s stadium requirements it is the de facto venue for European matches on the Island. Of the two clubs, APOEL have been much more successful in UEFA competitions having progressed to the group stages of the Champions League on three occasions.

APOELs most successful run to date came during the 2011/2012 season when they topped their a group containing Zenit St. Petersburg, Shakhtat Donetsk and FC Porto before being eliminated by Real Madrid in the quarter finals. AC Omonia by contrast have yet to even reach the group stages of the Europa League.

Since opening the GSP stadium continues to be the home of the Cypriot National Team, and has been used to host the qualification matches of every tournament with the exception of the 2010 World Cup. Due to a sponsorship name Cyprus reluctantly moved to Antonis Papadopoulos Stadium for the campaign.

Cyprus’s national stadium has occasionally been used as a neutral venue by other clubs. In 2002 it hosted Israeli teams,in Europe and during the 2013/2014 season it hosted the second leg of Dynamo Kyiv and Valencia in the Europa League after riots in the Ukrainian capital.

Below is a seating plan of APOEL, Omonia & Cyprus's GSP Stadium: 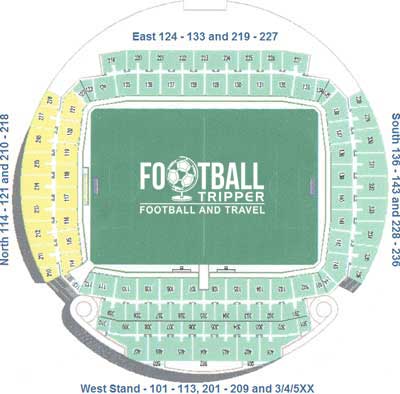 GSP Stadium is comprised of four stands: North, East, South and West which is the main stand which has multiple tiers of seating.

For international matches it appears as if away fans are housed within the south stand which sits behind the goals. The standard allocation of tickets appears to be around 2,000 which means that around half of the 4,953 capacity stand is occupied by visiting supporters.

Sadly the ground isn’t really located within the entertainment district which means there’s a lack of independently run bars and cafes in the area immediately surrounding GSP Stadium.

It doesn’t appear as if either of the resident clubs or the FA of Cyprus currently offer stadium tours of GSP. If this changes in the future we’ll be sure to update this section.

Tickets for Intentional matches should be purchased via your football association. Tickets for both APOEL and Omonia can be purchased from online or in person at GSP stadium on matchdays providing the match hasn’t sold out by then.

How to get to GSP Stadium

Where is GSP Stadium?

The Sports complex contains a car park which has enough space for 2,850 vehicles.

There is no rail transport system in Cyprus which means that you will either have to catch a bus, hail a taxi or rent a car. The good news for British Football Trippers is that the Island also drives on the left hand side which makes things easier.

Larnaca International Airport, the main airport of Cyprus, is located Airport just under 45km from GSP stadium. Around 50km from the capital city, you can catch a shuttle bus straight to Nicosia which coincidentally goes past the stadium.

Within the GSP sports complex there is the Allegra Sports Hotel which is unbeatable in terms of proximity to the stadium. As the whole Island of Cyprus isn’t that large you can almost have your pick of accommodation options from city apartments in Nicosia to villas in the tourist haven of Ayia Napa.

Who plays at GSP Stadium?

What is the capacity of GSP Stadium?

As of 2023 GSP Stadium has an official seating capacity of 22,859 for Football matches.

When was GSP Stadium opened?

GSP Stadium officially opened in 1999 and is home to APOEL, Omonia & Cyprus

Covid Restrictions may be in place when you visit GSP Stadium in 2023. Please visit the official website of APOEL, Omonia & Cyprus for full information on changes due to the Coronavirus.