Stade Josy Barthel is a multi-purpose stadium which is currently used to host the home matches of the Luxembourg National Football Team.

The original version of Stade Josy Barthel first opened in 1931 after a construction period of around three years. Known then as Stade Municipal, the stadium was renamed in honour of Josy Barthel in 1993 who remains currently the only athlete from Luxembourg to have won a gold Medal at the Olympic games.

Josy Barthel won the 1500m gold at the 1952 Olympics which was held at Helsinki’s Olympiastadion in Finland.

With an athletics track around the perimeter of the pitch combined with the fact that the stadium is home to CAL Spora – one of the largest athletics clubs in Luxembourg many feel that Stade Josy Barthel doesn’t feel like a football stadium.

Perhaps a long time coming, it was announced in June 2014 that a new purpose-built rectangular stadium would be constructed in Kockelscheuer in order to host the country’s rugby and football matches.

Expected to have a capacity just under 10,000, the stadium would have a slight increase in size compared to the current 8,000 capacity of Stade Josy Barthel.

To date the record attendance for football appears to have been set during the Euro 2016 qualifiers, when Luxembourg hosted former World Champions and Euro 2012 Champions Spain. The Spaniards defeated their hosts by a comfortable 4-0 scoreline in front of 8,500 supporters.

Below is a seating plan of Luxembourg national team's Stade Josy Barthel: 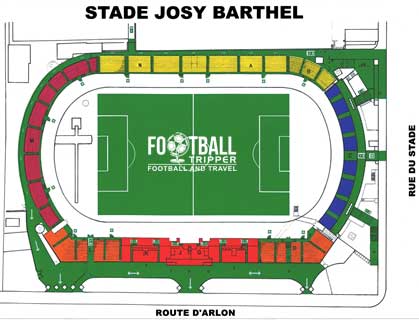 When Northern Ireland played Luxembourg in a 2014 World Cup qualifier back in September 2013, fans were housed within seating blocks A/B/C which appears to be the south-east corner.

It appears as if the standard allocation of tickets is set at around 1,250, but as Scotland found out they were given an additional 1,000 tickets for the match due to demand.

There are numerous places to eat and drink in Luxembourg City however they are predominantly located away from the stadium.

Used to host football matches only a handful of times a year there unsurprisingly isn’t a permanent club shop at the stadium.

There aren’t any stadium tours available of the facilities at Josy Barthel – you can pretty much take all of it in when you see a match there.

How to get to Stade Josy Barthel

Where is Stade Josy Barthel?

Josy Barthel Stadium sits around 1.8 km from the centre of Luxembourg City which means that most fans can make the journey by foot in just over 20 minutes.

Parking is extremely limited at the stadium, and thus isn’t advisable on matchdays. Having said that there is a multi-storey “Park & Ride Car Park” opposite the ground which you may wish to try if you get there early enough.

The small Findel Airport sits 6km northeast of Luxembourg City, and this it eh main international flight hub of the country. Upon arriving you can catch the number 16 city bus to the city centre in approximately 25 minutes for a bargain €1.50.

There aren’t really any hotels within the immediate environs of Josy Barthel Stadion which means that you will have to make your way back to the city centre after the match.

Much better placed for the night-life you will find familiar options such as Novotel, Park Inn by Radisson Best Western and Hotel Ibis.

Who plays at Stade Josy Barthel?

What is the capacity of Stade Josy Barthel?

As of 2023 Stade Josy Barthel has an official seating capacity of 8,500 for Football matches.

When was Stade Josy Barthel opened?

What is the postcode for Stade Josy Barthel?

The postcode for Stade Josy Barthel is L-1140 .

Covid Restrictions may be in place when you visit Stade Josy Barthel in 2023. Please visit the official website of Luxembourg national team for full information on changes due to the Coronavirus.