Gelora Bung Karno Stadium or Gelora Senayan Main as it was previously known as, is the national stadium of Indonesia. Located within the capital city of Central Jakarta, the stadium boasts an impressive capacity in excess of 88,000.

Construction on Indonesia’s National Stadium took place over a period two years between February 8th 1960, and July 21st 1962.  Purpose built to host the fourth Asian Games, the stadium was originally capable of accommodating 120,000 supporters which put it on par with such iconic grounds as Wembley, Nou Camp and the Maracanã.

Municipally owned, the newly declared independent nation of Indonesia received financial assistance from the Soviet Union in the form of a generous loan.

To this day the stadium continues to be used as a multi-purpose sports venue, and it will even host the 2018 Asian Games. However it has also increasingly become associated with football, as the popularity of the sport grows across the country.

In 2007 Indonesia co-hosted the AFC Asian Cup along with Malaysia, Thailand and Vietnam. Gelora Bung Karno Stadium was elected to host the final despite being the second largest venue behind Bukit Jalil National Stadium in Malaysia, and the ground really became the centrepiece of the tournament.

The stadium’s is commonly abbreviated to GBK Stadium despite the official name of the ground being Utama Gelora Bung Karno after Indonesia’s first president. It is often referred to as the Main Stadium as well to distinguish it from the other facilities located within the wider sports complex. 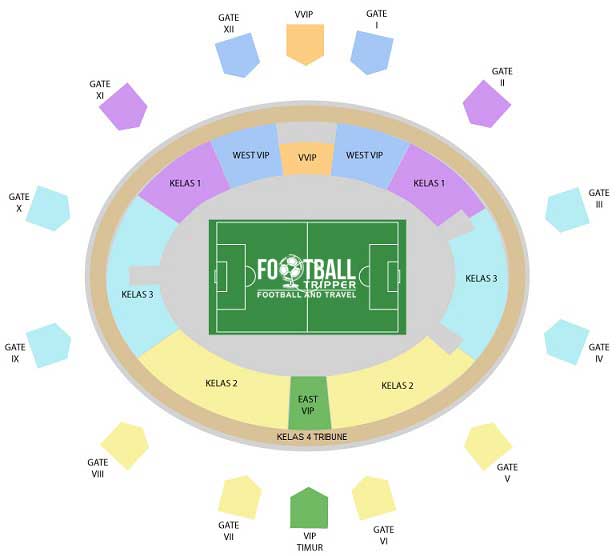 How to get to Gelora Bung Karno Stadium

Where is Gelora Bung Karno Stadium?

What is the capacity of Gelora Bung Karno Stadium?

As of 2023 Gelora Bung Karno Stadium has an official seating capacity of 88,083 for Football matches.

Covid Restrictions may be in place when you visit Gelora Bung Karno Stadium in 2023. Please visit the official website of Indonesia National Team for full information on changes due to the Coronavirus.