GN Bouw Stadion still commonly referred to as the Krommedijk Stadium by fans, is a purpose built football ground located in the Western city and municipality of Dordrecht. Home to local football team FC Dordrecht since opening, the Krommedijk has a capacity of 4,235 which is small compared to Eredivisie teams.

FC Dordrecht have traditionally played their matches at the Krommedijk Stadium which opened during the 20th century, but by the mid 1990s the facilities were beginning to show their age. With Netherlands set to co-host the Euro 2000 Championship with Belgium, there was an increased impetus across the country to upgrade football stadiums – something Dordrecht happily did.

As one of the smaller clubs to grace the top flight of Dutch Football, The Sheep Heads lacked the financial muscle to construct something as large as their 1990s contemporaries, with Vitesse’s GelreDome and Heerenveen’s Abe Lenstra Stadion arguably creating more eye-catching stadium designs compared to the understated GN Bouw Stadion.

Consisting of just 4,235 seats across four unique and unconnected stands, the completely reconstructed stadium was built on the previous site of Krommedijk Stadium and was the culmination of three years planning, designing and construction.

The stadium is still commonly known by its original name despite the naming rights being sold firstly to builders GN Bouw in 1999 and then Riwal Lifts BV in 2014.

Currently GN Bouw Stadion is the second smallest ground in the Eredivisie and thus naturally there has been speculation that the Dordrecht could either expand the current facilities or even relocate. In 2006 the club explored three possible locations with a view to building, but progress has virtually been non-existent with little news coming from the board of directors.

Below is a seating plan of Dordrecht's Riwal Hoogwerkers Stadion: 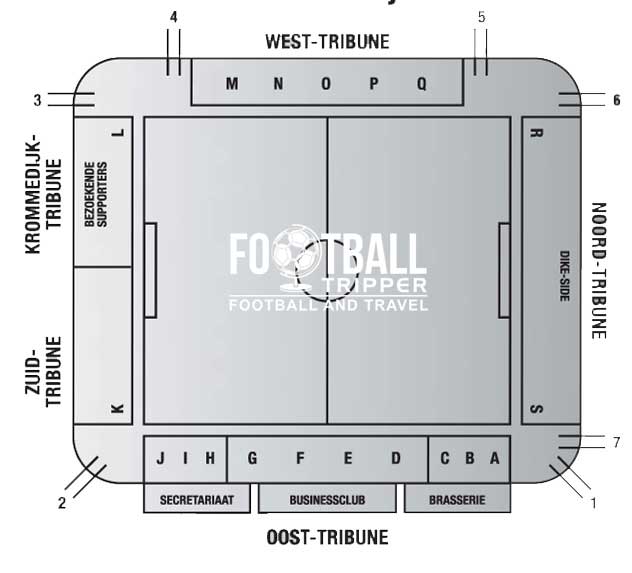 Away fans are housed within the south-west corner or more correctly, in the western most side of the south stand. Known as the Krommedijk Tribune, the travelling supporters or Bezoekende are housed within section L as shown in the above seating plan.

The fan shop is open once a week on Thursday evenings between 7.30 and 10.00 pm which allows fans to get there at their convenience after work. As a result you may wish to browse the range of official merchandise online via Dordrecht’s E-Store.

It doesn’t appear as if FC Dordrecht currently offers fans the chance to undertake a tour of the facilities at GN Bouw Stadion. If this ever changes in the future we’ll be sure to update this section.

How to buy Dordrecht Tickets

Tickets to see FC Dordrecht in action at the GN Bouw Stadion can either be purchased online or in person from the stadium in the days leading up to the match. You can also purchase a ticket before kick-off on matchdays providing the ground hasn’t sold out.

Please note that ticket’s purchased in person from the ticket office carry a € 3.50 surcharge to help cover the additional costs. When FC Dordrecht play within the Erediviise, expect the prices to increase further by € 5.00 – € 10.00

How to get to Riwal Hoogwerkers Stadion

Where is Riwal Hoogwerkers Stadion?

GN Bouw Stadion i located 1.8 km from Dordrecht Railway Station and around 2.3 km from the Central area which overlooks the Oude Maas river.

There is one large car park located north of the stadion however the exact matchday arrangements are unclear. You may have to park within the surrounding residential area.

Dordrecht station sits on the Breda-Rotterdam railway line and is regarded as an important hub of the Nederlandse Spoorwegen railway network.

Rotterdam Airport is located less than 35 km north of Dordrecht making it one of the most convenient places to fly into for Football Fans. Alternatively Amsterdam Schiphol at 84 km is a good choice as it is connected to the city via the train station.

For places to stay in Dordrecht you’re looking back towards the Centrum area overlooking the river. Here there is the likes of Hotel Dordrecht, and Innercity Hotel however to be honest thee isn’t that much choice.

Who plays at Riwal Hoogwerkers Stadion?

What is the capacity of Riwal Hoogwerkers Stadion?

As of 2023 Riwal Hoogwerkers Stadion has an official seating capacity of 4,100 for Football matches.

When was Riwal Hoogwerkers Stadion opened?

What is the postcode for Riwal Hoogwerkers Stadion?

The postcode for Riwal Hoogwerkers Stadion is 3312 LH.

Covid Restrictions may be in place when you visit Riwal Hoogwerkers Stadion in 2023. Please visit the official website of Dordrecht for full information on changes due to the Coronavirus.