Omladinski Stadium is a multi-purpose sports stadium located in Serbia’s capital and largest city, Belgrade. Used predominantly for the football matches of OFK Beograd, the 19,100 capacity stadium has an athletics track around the pitch’s perimeter and first opened back in 1957.

Omladinski Stadium first opened in August 1957, however the inaugural match of OFK Belgrade took place on the 24th August against FK Buducnost Podgorica, resulting in a 3-1 win for the home side. Designed by a team of local engineers, the original stadium was capable of accommodating anywhere between 28-30,000 supporters, however officially the stadium was built with a 23,820 capacity – at least according to the plans.

Constructed in the latter half of the 20th century, the stadium managed to survive until the turn of the millennium when the first large-scale renovations occurred since opening. Beginning in the year 2000, the work was mostly geared towards the soft-furnishings, and it saw the refurbishment of the changing rooms and the club’s matchday facilities. A new display monitor was installed, and the stadium was converted to all-seating after the fitting of blue and white plastic chairs throughout.

Historically Omladinski Stadion has hosted numerous high-profile European matches including the 1962-1963 Cup Winners Cup campaign which saw OFK Beograd play Tottenham in the semi-finals after overcoming Napoli in the quarters. Since the format change of the Champions League and the creation of the Europa League the club have yet to reach the group stages of either competition having lost qualification matches against the likes of Lokomotiv Plovdiv, Auxerre and Galatasaray.

Currently Omladinski Stadium is only capable of holding a third of its official capacity of 19,100, and is in a partial state of dereliction. Since the Summer of 2012 there has been a petition addressed to the local council, owners of the stadium, to either renovate the stadium or begin the process of finding a new stadium. Unfortunately there appears to be little progress on either solution as of 2015.

Below is a seating plan of OFK Beograd's Omladinski Stadion: 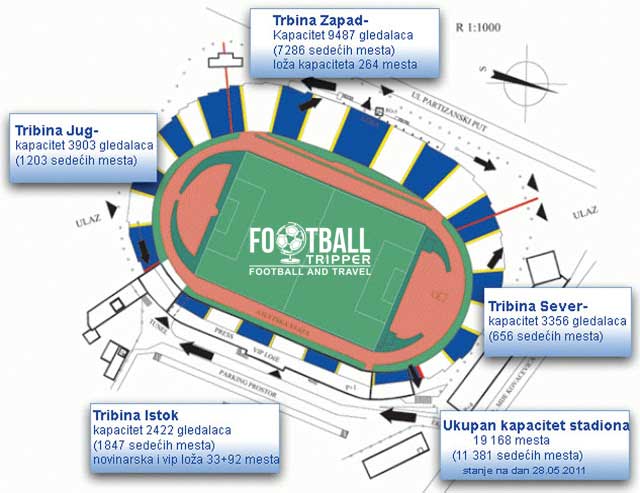 How to get to Omladinski Stadion

Who plays at Omladinski Stadion?

What is the capacity of Omladinski Stadion?

As of 2023 Omladinski Stadion has an official seating capacity of 19,100 for Football matches.

When was Omladinski Stadion opened?

Covid Restrictions may be in place when you visit Omladinski Stadion in 2023. Please visit the official website of OFK Beograd for full information on changes due to the Coronavirus.