Bridgeview Stadium or Toyota Park for sponsorship reasons is a purpose built 20,000 capacity soccer stadium located in Bridgeview village in Cook County, Illinois. The ground opened in 2006 at a cost of around $100 million and is currently home to Major League Soccer Side Chicago Fire and the women’s soccer team Chicago Red stars.

Chicago Fire first moved to Toyota Park on 11th June 2006 after previously playing their home matches at Soldier Field which is home to NFL Chicago Bears. Although Soldier Field was much larger with a capacity of 61,500 with a decent pedigree for soccer after hosting matches of the 1994 World Cup, the club opted to relocate to purpose-built facilities.

Incorporating design elements from European soccer grounds such as short distance between the pitch and the furthest away seat, and the American preference of including a concert stage behind one of the goals, Toyota Park is somewhat of a hybrid stadium.

Anticipating future growth, the stadiums is easily capable of being expanded to 30,000 with the original design planning for such an occasion. Sometimes referred to as Bridgeview Stadium, the ground is officially known as Toyota Park after the Japanese auto-mobile company signed a 10 year naming rights agreement in 2006.

The highest profile soccer matches at Toyota Park to date are probably the 2010 World Cup qualification match against Trinidad and Tobago on September 10th 2008, followed by the 2006 MLS All-Star Game against Chelsea. Other pre-season friendlies against famous teams include the likes of A.C Milan and Everton F.C.

Below is a seating plan of Chicago Fire's Toyota Park: 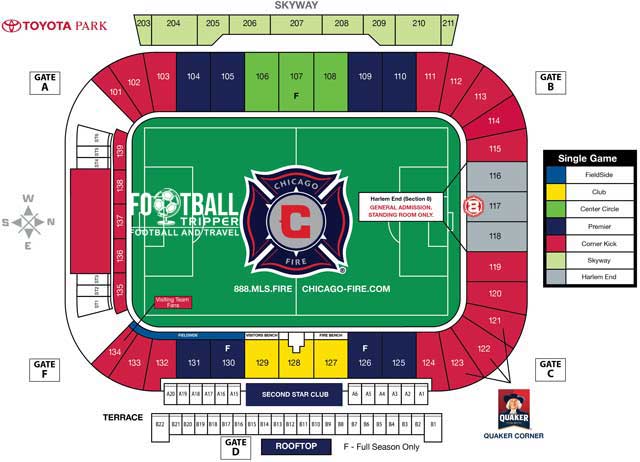 In association with Heineken Chicago Fire offer fans a great matchday service known as Pub to pitch. The shuttle bus allows fans to drink without worrying about drivings, and picks up fans from several pubs throughout the city.

Check out the link for more information, but for non-season ticket holders it costs $15.00. It’s ideal for those who like a drink and matchday camaraderie with fellow socer fans.

Inside the gate there are numerous concession stands serving each stand, with popular stadium classics such as hotdogs, popcorn and hamburgers all readily available to fans.

Chicago Fire operate a permanent club shop at the stadium in addition to several merchandising kiosks on match days and an official online shop run in conjunction with the league’s official MLS Store.

It doesn’t appear as if Chicago Fire currently offer fans the chance to tour the facilities at Toyota Park, however if this ever changes we’ll be sure to update this section.

How to buy Chicago Fire Tickets

Tickets to see Chicago Fire play at Toyota Park can either be purchased from the box office located east of the stadium Monday to Friday between 10.00 am – 4.00 pm or online from Ticketmaster who are the club’s official ticker vendor

Please note all prices are illustrative examples from one match and don’t include booking fees or every section of the ground.

How to get to Toyota Park

Where is Toyota Park?

Driving in Chicago isn’t regarded as one of the most serene of pastimes, however for a lot of Fire Soccer fans it is the default mode of transport on matchdays – especially as the stadium isn’t ideally suited to the city’s world class public transport.

Parking lots at the stadium open for up to three hours before kick-off and cost $15.00 per car, and $30.00 for RV or buses. The two largest, the north and east lot both permit general parking with this handy parking map showing you where you need to go.

Tailgating is permitted in official car parks before kick-off, and Section 8 is regarded as the best for atmosphere as it is where several prominent supporters groups congregate before kick-off.

The two closest hotels to Toyota Park are probably the New Relax Inn and The Clayton Motel. East of the stadium on the corner of 65th street and S Cicero avenue there is a hotspot of hotels due to the airport including a Hilton, Marriott and Holiday Inn.

Who plays at Toyota Park?

What is the capacity of Toyota Park?

As of 2022 Toyota Park has an official seating capacity of 20,000 for Football matches.

When was Toyota Park opened?

What is the postcode for Toyota Park?

Covid Restrictions may be in place when you visit Toyota Park in 2022. Please visit the official website of Chicago Fire for full information on changes due to the Coronavirus.