Estádio Moisés Lucarelli first opened in 1948 after it was constructed by the local community, and has been home to Ponte Preta FC ever since. It currently has a capacity of 19,722 and at one time was the third largest ground in Brazil.

Estádio Moisés Lucarelli first opened on 12th September 1948 with a inaugural match between the home side Ponte Preta and XV de Piracicaba. Officially named after the man who was instrumental in the construction of the stadium, it is still commonly referred to by its nickname, Estádio Majestoso (Majestic Stadium), which arose from the fact that it was the third largest stadium in Brazil upon opening.

Only behind the likes of Estadio Pacaembu and Estadio São Januário in size at the time, the official record attendance was set on 1st February 1978 when 37,274 fans attended a match against São Paulo FC. Unofficially a match against Santos FC reportedly attracted 40,000 fans on 16th August 1970 for the final game of the season, with a further 4,000 spectators outside trying to get into the ground.

Today the capacity of the stadium sits around 17,728 after AA Ponte Preta have been required to renovate the stadium and upgrade comfort levels in line with modern safety legislation as per both the Brazilian FA and FIFA. As the structure of the ground hasn’t really changed since opening it is one of the most historic football stadiums in Brazil.

What makes Estádio Moisés Lucarelli even more remarkable is the fact that it was entirely funded and constructed by fans of the club. Organised by Moses Lucarelli, he famously launched a “Bricks Campaign” which collected over 250,000 bricks in two months in 1946 as well as raising  the majority of finance for the project through charitable enterprises.

Below is a seating plan of Ponte Preta's Estádio Moisés Lucarelli: 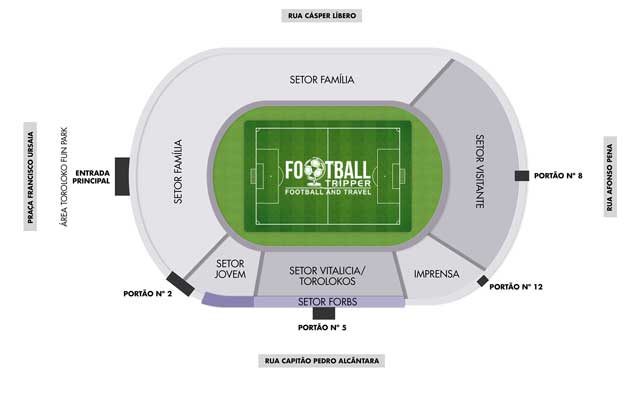